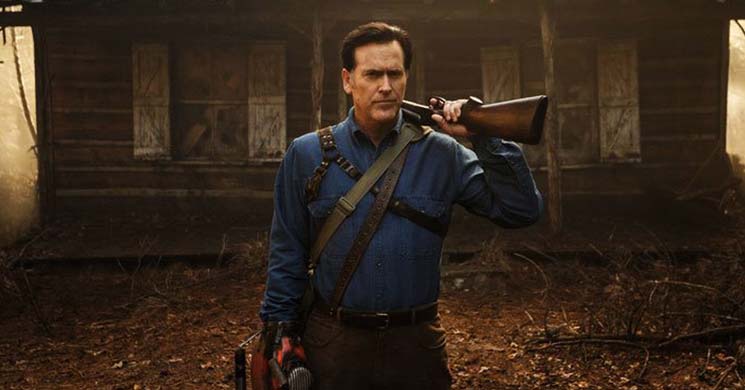 (This article is available also in italian)
I wrote my first article on NAQB with pain in my heart. After spending years hoping for a fourth installment of Evil Dead, three years ago the announcement of the Ash vs Evil Dead pilot directed by Sam Raimi, (that Sam Raimi) and written by Sam, Ivan Raimi and Tom Spezialy… the same authors of the Evil Dead Trilogy was made. 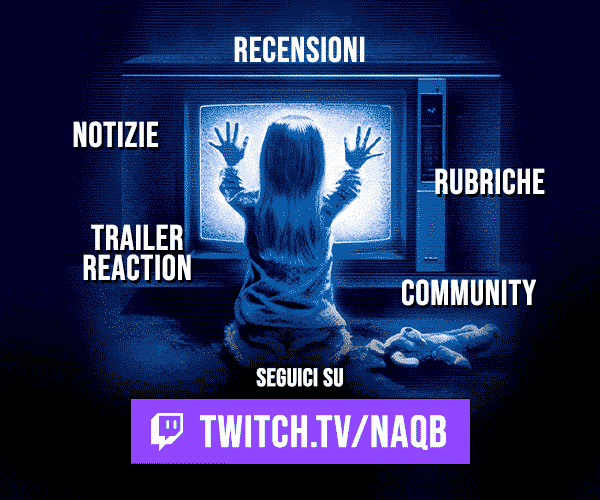 After I watched the trailer with my closest friend we thanked God, hoping that it was not a farce, or a revival made only for money. Then we saw the pilot, in silence, with our eyes wide open. At the end of it, we looked at each other and we both thought the same thing: Evil Dead is back in the best way possible.

During that episode we got so excited by the absurdness of it, the intense thrilling sequences, the over the top humor and that pure horror that kept us glued to the screen since we were kids.

Raimi’s direction explains the Evil Dead world so well in a particular scene featuring the character of Amanda Fisher. She faces off against the demon who possesses the girl Ash had a one night stand with.

At one point, this creature gets up when her brain is decimated and looks Amanda in the eyes telling her, “We know who you are.”

When evil shows up again, Ash Williams tries to run away from it because he’s tired of facing it. His neighbor Vivian delivers a message to him when she is possessed, “It is time to test the mettle of man.”

Yeah… These three years were a test for Ash to prove his mettle. The Dictionary defines mettle as the “courage to carry on.” If someone wants to “test your mettle,” they want to see if you have the heart to follow through when the going gets tough.

It is no coincidence that The Mettle of man is also the title of the last episode of Ash Vs Evil Dead.

Ash vs Evil Dead has been canceled. What leaves me bitter about this turn of events is the fact that this series was created to make the fans happy. Now, these same fans have also contributed to the end of the series.

The Mettle of Ash, The Mettle of Bruce Campbell, a man who in order to please his fans, decided to take the risk of revisiting his iconic character 30 plus years later.

If I meet Bruce Campbell one day, I hope I never mention anything about Ash’s universe, I’d rather go in the woods to talk about nature than to mention Evil Dead to him. As a fan, I feel guilty about asking him anything about Sam Raimi and the Necronomicon, because in the end he gave us what we wanted and we failed to respond in kind.

The following is an interview conducted a couple of days before the announcement of the cancellation of the series.

The interviewee is Bryan Edward Hill, screenwriter of the episode Rifting Apart, the eighth episode of the series directed by Mark Beesley (the director of 2×07: Delusion).

I consider this episode to be one of the best in the series, so I decided to contact Bryan on Twitter who was kind enough to answer my questions. There are no questions about the cancellation.

This interview was made in collaboration with Emanuele Crivello of Evil Dead Italia (I will never stop thanking him for the last three years we spent talking about this series and doing everything we could to get it renewed. Also, thank you to the #bringbackboomstick movement designed by Susan Leighton) and the comics portal Lo Spazio Bianco (which dedicated an article to Bryan Hill and his career in the world of comics) and you can read the second part on the blog at the end of the interview.

NAQB: We interviewed the Meza Brothers, and we have discovered that they are hardcore fans of Evil Dead. How much and how did you know the Evil Dead franchise before starting to work on this episode?

Bryan E. Hill: Quite a bit, actually. When I was a kid, EVIL DEAD was that hard to find, completely insane horror movie that only the local, family-owned video store had. Watching it felt like I was watching something that was impossible. It had so much energy and creativity. Instantly, I was a fan of the franchise. I even wore a blue shirt for a little while. Had to be like Ash.

NAQB: AVED has always had a respectable soundtrack, was the music chosen during the script writing process or later in production? And how were The Drifters, MC5s and AC / DCs chosen for Rifting Apart?

Bryan E. Hill: That’s all show-runner Mark Verheiden. He’s got great taste in music, and he knew what he wanted to highlight the moments in that story.

NAQB: The scene in which Pablo fights in the hardware store alone gave me a shiver down my spine making me think of the S-mart Ending of Army of Darkness. Is it possible to read a piece of the script, with your comment?

Bryan E. Hill: I’d love to, but we have to keep the scripts under wraps. I will say that part of the fun with ASH vs EVIL DEAD is figuring out how to slay deadites in the coolest ways. It’s impossible to go into a store with a paint shaker and not think about putting a deadite’s head in it. At least it is for me, hahaha.

NAQB: Rifting Apart is one of the very few episodes in which Ash’s chainsaw does not appear … and it works so well! Is it important not to repeat too much in writing an episode of the series?

Bryan E. Hill: In general, you don’t want the audience too far ahead of you. You want to do new things and sometimes that means not using all the old things, all the time. Ash is such a great character that he doesn’t need a weapon to make a story work. With this episode, we wanted to dig a little deeper into his character and show the heroism he has underneath all that personality. Bruce did such a great job in those moments. He’s incredible.

NAQB: Seeing the complete episode on screen, what is your favorite scene in Rifting Apart?

Bryan E. Hill: I’m a fan of Kelly. Dana is just an awesome person so seeing her refusing to buckle to the evil in the rift was a joy.

NAQB: And what is your favorite episode of Ash Vs Evil Dead?

NAQB: Working with Ivan Raimi must be exciting. How was the script of the episode written? And what are the indications provided to you in order to work?

Bryan E. Hill: Ivan created a LOT of the work that inspired me as a kid. Having him in the room was an amazing experience. For everything we were doing, he would tell us what was “Evil Dead” and what may have missed the mark. Having him there was invaluable. He’s just a humble, brilliant and great guy

The interview continues on Lo Spazio Bianco (click here or on the image below) where Bryan will answer questions such as:

Thanks to Bryan, Emanuele Crivello e Susan Leighton editor for 1428elm.com and creator of #bringbackboomstick for help us to translate both the articles.

(531)
8,59 € (a partire da 6 Dicembre 2022 06:51 GMT +00:00 - Altre informazioniProduct prices and availability are accurate as of the date/time indicated and are subject to change. Any price and availability information displayed on [relevant Amazon Site(s), as applicable] at the time of purchase will apply to the purchase of this product.)
Compra

(20)
19,60 € (a partire da 6 Dicembre 2022 06:51 GMT +00:00 - Altre informazioniProduct prices and availability are accurate as of the date/time indicated and are subject to change. Any price and availability information displayed on [relevant Amazon Site(s), as applicable] at the time of purchase will apply to the purchase of this product.)
Compra

(4639)
10,87 € (a partire da 6 Dicembre 2022 06:51 GMT +00:00 - Altre informazioniProduct prices and availability are accurate as of the date/time indicated and are subject to change. Any price and availability information displayed on [relevant Amazon Site(s), as applicable] at the time of purchase will apply to the purchase of this product.)
Compra